The web is exploding with new information about science and sacred geometry, and it is indeed fascinating. Many are postulating that the universe is fractal and holographic, and that at every scale from atom to solar system and beyond you see the same pattern. It's all about "As above, so below," meaning that the same pattern that is above is also below. There is a hierarchy of the same fundamental patterns. Some are postulating that the universe is a torus and that the electron is also a torus. Some postulate that the origin of everything is a point, and that point is the center of a torus, and a black hole is energy flowing in and a white hole is energy flowing out.

Pythagoras said, "All is number." The new field of vector based mathematics says that there are only nine numbers. There is fascinating information about the structure of space on the cosmometry website.

I particular like the view that at the center of every vibration, every wave, is the heart of God, and God is a twin flame and God creates other twin flames in his/her image. God is both masculine and feminine. God is in the center of everything and from that center God energizes everything. You might say that Alpha and Omega are the highest pair of twin flames in our universe. Mathematically, it might be described like the following ( from rex research). You can skip the scientific stuff if you like, but for the scientifically minded: 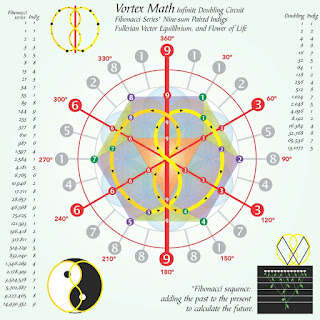 The process of reducing a number down to one digit is practiced in mainstream science. Buckminster Fuller called these digits integrated digits, or "indig 9". This process is sometimes called casting out nines, and it's similar to modular arithmetic or taking "mod 9" of a number, except that instead of 0 when there is no remainder you have a 9. I think of it as going around the circuit a certain number of times, just like a clock where there are only 12 numbers. It's not 15 o'clock, or 27 o'clock, or 39 o'clock, it's 3 o'clock. I think of each new time around the circuit as a new harmonic, a new whole number multiple. You can see that if you do take the single digits of the Fibonacci sequence you get a repeated pattern every 24 numbers, and if you keep doubling starting with 1 you get 1,2, 4, 8, 7,5 as a repeating sequence.

It is all quite fascinating, and twin flames are at the heart of it.